The moguls have teamed up to develop legal cannabis businesses in the region, making the most of ideal growing conditions, Rastafarian farming traditions, and the move to progressive laws; First plane load of hemp seed destined for 300 acres in St. Kitts-Nevis and Dominica arrives this week 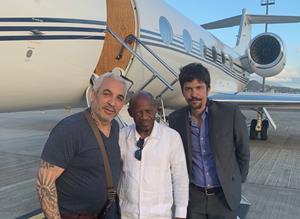 Bassetere, St. Kitts-Nevis, April 30, 2019 (GLOBE NEWSWIRE) — Alki David and Chase Ergen announced today they have formed a consortium aimed at developing the cannabos business in Eastern Caribbean nations such as St. Kitts-Nevis, Dominica and Antigua. Plans include purchasing agricultural land and partnering with farmers to create a cooperative entity modeled after the ones in Switzerland. David and Ergen will create 1000s of jobs and also tap into the rich cultural history and cannabis know-how of the strengthening Rastafarian movement in the region.  The consortium has already had its first meetings with business and government leaders across the region and will be expanding its outreach during the month of May.

Both billionaires are known for their success in media: David for his pioneering FilmOn Networks and Hologram USA and Ergen for his family’s Dish Network and many other media and marketing startups  David has also developed a significant cannabis and CBD business based in Gstaad, Switzerland, Swissx Labs, which takes pride in offering the purest CBD products available.

The announcement comes while the government of St. Kitts-Nevis is moving to legalize medical use of cannabis products, and decriminalize marijuana use. It’s the latest Caribbean nation, following Jamaica, Antigua, Bermuda and the Caymans, to make progressive changes to exploit the massive potential of the sector and the region’s unique varietals and ideal growing conditions.  There is also a vast store of knowledge in the region about the cultivation and use of cannabis for medical and religious purposes—as cannabis shifts from being an illegal $400 billion business to an even bigger legal one,

“The Eastern Caribbean is in perfect position as cannabis shifts from being an illegal $400 billion business globally to a legal one worth ten times that,” said Alki David. “It will be the Silicon Valley of cannabis, the Wall Street, the Hollywood.”

David and Ergen’s fund will go to purchase land for cultivation, for research and development, and to support the policy changes that will let the St. Kitts-Nevis and its neighbors become global leaders in the sector. Favorable legal, banking and citizenship policies, as well as advanced acceptance of cryptocurrencies add to the attractiveness of developing business in the area.  The first plane load of hemp seed for a designated parcel of land totaling 300 acres will arrive on Thursday, May 2nd.

“St. Kitts-Nevis and its neighbors are ideally situated to produce the highest quality CBD in the world,” said Chase Ergen. “We have no doubt we will be able to double their GDPs within a matter of years as the region takes its rightful place in a market that is literally changing people’s lives.”

Alki David added: “Ultimately we are bringing cannabis back to its birthplace.”

For more information or to discuss business opportunities contact: info@swissx.com

For press information or to arrange interviews with Alki David or Chase Ergen contact: owen@hologramusa.com