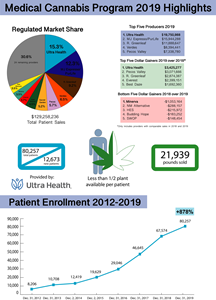 While the other four top providers lag behind Ultra Health by up to 192%, the average patient sales among the remaining 33 providers trails even further at less than $3.3 million per operator. New Mexicans are continuously selecting Ultra Health as their preferred provider for cannabis care by 6 to 1.

The overall average producer revenue in 2019 was $3.8 million, while the median was $2.8 million. Eighteen providers fell below the industry average.

The fastest growing counties with at least 500 cardholders in 2019 include:

The conditions with the most qualified patients enrolled include Post-Traumatic Stress Disorder (PTSD), chronic pain, and cancer, which make up 93% of all patients in the program.

This year will be the first full year for many programmatic changes that normalize the medicinal use of cannabis including plant count, new qualifying conditions, and the removal of the residency requirement for qualified patients.

In 2020, it will be the first full year cannabis providers can grow more than 450 plants each since 2015. The courts ordered NMDOH to promulgate new rules for cultivation in 2019 after former Santa Fe District Court Judge David K. Thomson found the 450 plant cap limit was arbitrary, capricious and frustrated the purpose of the Lynn and Erin Compassionate Use Act in late 2018.

Although NMDOH chose to raise the plant cap to a maximum of 1,750 plants per producer without sufficient evidence, the new cap is unlikely to satisfy the statutory mandate of adequate supply. Patients will continue to pay higher prices for medicine as compared to other medical cannabis states until arbitrary restrictions on cultivation and therefore the supply of medicine are permanently abolished.

Since being approved, the six new conditions altogether account for 235 new patients as of December 31, 2019. NMDOH has done little to no outreach to inform those with these conditions they now qualify for medical cannabis treatment.

Other changes to New Mexico’s laws regarding cannabis are the legal use of medical cannabis by children in schools and by those who are in custody or under supervision of a state or local government. While these statutory changes were signed into law last year, state agencies still need to make advancements to meet the Legislature’s intent.

A photo accompanying this announcement is available at https://www.globenewswire.com/NewsRoom/AttachmentNg/2b66466b-dc44-472e-a81b-88d2fd9ffc88