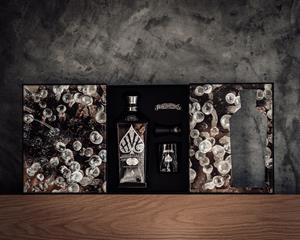 LOS ANGELES, Dec. 02, 2021 (GLOBE NEWSWIRE) — Spacestation, the global leader in the manufacturing of cannabis beverages, has merged with Mammoth Distribution, California’s premier distributor and producer of some of the state’s top-selling brands, including Heavy HittersTM and AlmoraTM.

“After seeing the cutting-edge technology pioneered by Spacestation to create Liquid TrichomesTM for our Heavy Hitters HVYTM tincture, and their robust ability to ensure an authentic cannabis experience in everything they produce, we knew they were the only team with the vision and capabilities to grow with us as we roll out new products across the USA and Canada,” said Mammoth CEO and Co-Founder Skyler Sutton. “The deal quickly came together when we realized both companies have an aligned priority and culture of radiating love through people and products.”

The initial collaboration between Spacestation and Mammoth is the groundbreaking, cannabis tincture reimagined, the HVY Grand. Launched under the Heavy Hitters brand, which is celebrating its 25th Anniversary, HVY is a love letter to cannabis, featuring a first-of-its-kind formulation that preserves and accentuates the taste and effects of the storied Acapulco Gold strain, all presented in a bespoke bottle and box. The key innovation, developed with Spacestation, is the Liquid Trichomes process, a proprietary single-strain nano-emulsion infused with pure Acapulco Gold terpenes.

“From the beginning, our strategy was to remain independent, but when we started working with the people at Mammoth, we realized that our culture, goals and synergies were so aligned that the combination made too much sense to pass up. We knew that if we were ever to attach to a brand house it had to be one that could win in competitive states, especially California,” said Spacestation CEO Brad Mora. “Mammoth proved that with the success of its top premium brand, Heavy Hitters, and the state’s fastest-growing flower brand, Almora. It’s a testimony to the amazing culture and relationships they have in this industry. Liquid Trichomes and HVY are just the beginning.”

With this monumental merger, the cannabis community can expect a future filled with a slew of innovative beverage and tincture products for the California market and beyond.

Mammoth Distribution, along with its Heavy Hitters and Almora brands, is one of the largest and most established cannabis companies in California. Heavy Hitters, known for the potency, purity and innovation of its industry-leading products, is currently celebrating its 25th anniversary. Almora, known for its sun-grown quality and consistency, has quickly established itself as a top-five flower brand in the state. The company’s expansive distribution network serves over 600 retail partners with industry-leading delivery speeds, maximum efficiency, and consistency. For more information, visit https://www.mammoth.org.

This content was issued through the press release distribution service at Newswire.com.